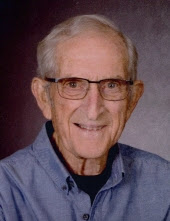 Melvin Beyer, 90, of Dows, passed away on Thursday, May 5, 2022 at Franklin General Hospital in Hampton. Visitation will be Tuesday, May 10, 2022 from 4-7 p.m. at the Surls Funeral Home in Iowa Falls with a private family burial at the Fairview Cemetery in Dows.

Melvin John Beyer was born on May 16, 1931 in Dows, Iowa to Carl and Barbara (Uthe) Beyer. On November 6, 1971, Melvin was united in marriage to Rosanne (Miller) (Christensen) Beyer in the First Lutheran Church in Dows. They renewed their vows at the St. Mary’s Catholic Church in Williams. In May of 1952, Melvin enlisted into the United States Army and served in the Korean War.

Melvin served as the President of Dows Golf Course and was a member of the Dows Legion Post 523. He also served as Secretary of the Freedom Rock Park in Dows. He devoted his time and efforts on the Freedom Bell Tower.

He was preceded in death by his parents, brothers Leo, Maynard and infant brother, sister Rosemary, son David Beyer and grandsons Joshua Beyer and Baby Franklin.