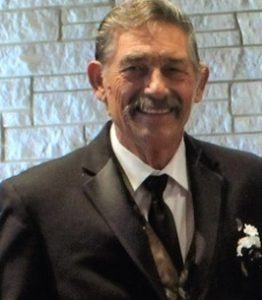 Michael Leo Moriarity, was born on September 13, 1949 to SaDonna (Rocheau) and James Moriarity in Worthington, Iowa. He passed away at his and Deb’s home in Estherville, Iowa on April 30, 2022 at the age of 72 years.

Michael attended grade school at the Catholic School in Worthington and then Junior and High School in Upworth, IA, graduating in 1967. Mike worked at Ertl Toy Company Factory in Dyersville, Iowa until November 1968, at which time he enlisted into the US Air Force.

Michael was united in marriage to Carolyn Ritter on November 8, 1969, and they lived in Idaho until he ended his active duty in the Air Force in 1972. They then moved to Forest City, Iowa, until 1978. In 1978, they moved again and lived in Leland, Iowa as their home and raised their three children: Norma, Kenny, and Jennifer. Carolyn passed away in July 2011. Mike started working at Winnebago Industries in Forest City in 1978, he also worked part-time at Kryslis. He retired from Winnebago and continued to work at Kryslis for a few years.

During the above years, Mike continued to be of service to his country in various ways for a total military service of 28 years; for his active duty from 1968 to 1972, his first year in Texas; then North Carolina; six months in South Korea; a year in Thailand; and was finally stationed in Mountain Home, Idaho until 1972. In this period of time, he was indirectly involved in the Vietnam and Kuwait wars/battles. He served in the United States Army Reserve from 1972 – 1982. He then continued serving his country in the Iowa Air National Guard from 1982 until 1997, when he retired from military service entirely.

Mike had two best friends for over 40 years, Kenny Steil and John Meyer. He enjoyed fishing, camping, traveling, watching races, westerns, and other favorite shows and movies. But most of all his pleasure was spending time with his family and friends.

In May of 2015 he met Debra (Whitacre) Henricksen and moved to Estherville in July. He and Deb bought a house together. Mike and Deb decided to get married on January 2, 2016, as a surprise (bonus) Christmas gift for all of their children and grandchildren, that they each were blessed with over the years.