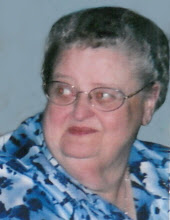 A funeral Mass for Harriet Skillen will be held at 11:00 a.m. on Thursday, January 27, 2022 at Immaculate Conception Catholic Church in Charles City with Reverend Tom Heathershaw officiating. Burial will be at Rose Hill Cemetery in Greene.

Harriet “Henri” Grace Skillen, the daughter of Ralph Edward and Lillian Mae (Smith) Skillen, was born April 1, 1939 in Greene, Iowa. She attended school and graduated from Immaculate Conception Catholic School. Upon graduation, Harriet began working at National T Grocery and at KCHA in Charles City as a secretary/office administrator. She then started her 27 year career as a dispatcher with the Charles City Police Department in 1977 retiring in 2004.

Harriet was a member of Immaculate Conception Catholic Church. She was an avid coin collector, enjoyed putting together artificial floral arrangements for family and friends, she loved cooking for her family, friends and all of her co-workers at the police station. Harriet also enjoyed shooting guns at the firing range, and found it very relaxing. She was a very special lady who would help anyone in need.