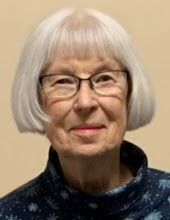 Dorothy “Bunny” Rodda of Charles City, passed away peacefully on Tuesday, January 4, 2022 at the age of 88 at the Floyd County Medical Center.

A gathering of family and friends will be held from 10:00 a.m. until the start of the service at the church on Friday.

Dorothy Elenora “Bunny” Rodda was born December 30, 1933, on a farm near Yankton, South Dakota. She was the daughter of Aage Ibsen and Lenora Paulsen Ibsen. At around age five, the family moved to a farm in Viborg, SD, where her father ran a successful dairy farm and her mother was a supportive homemaker. Bunny graduated from Viborg Public School in 1951 and went on to Grand View College (now University) in Des Moines, IA, where she earned her teaching degree. There she met William Frank (Bill) Rodda, whom she would marry in Viborg on August 19, 1956.

The newlyweds lived in Iowa City, IA, for four years while Bill attended dental school at The University of Iowa. During that time, Bunny taught kindergarten in Mt. Vernon, IA. Their son Bradly William was born in March 1960, and the family moved to Charles City in June upon Bill’s graduation from dental school. Daughter Karin Marie was born in February 1963 shortly after the family settled into their home on 8th Street, where Bunny continued to live for 59 years. Throughout the years Bunny was a devoted wife and mother, and was active in several organizations including Jaycee Wives and Chapter JQ P.E.O. She was a Cub Scouts den mother and she volunteered to make costumes for the junior high production of “Fiddler on the Roof.” Bunny loved baking and sewing and was known for her impeccable work, including designing and sewing her own wedding dress and that of her sister Rita, as well as all the bridesmaid dresses. She also sewed curtains, bedspreads, Halloween costumes, her own clothes, that of her children, and occasionally items for the neighborhood kids. Her Danish coffee cake and cinnamon bread are legendary.

After Bill passed away in 1984, Bunny went back to work in numerous office positions. Her final job, where she worked till she was 83, was her favorite: looking after the kids at “Y’s Guys” before- and after-school program. She truly loved the kids at Y’s Guys and believed she was making a difference in their lives.

Grandsons Caleb and Granger were the light of Bunny’s life, and she enjoyed spending Christmases with them, as well as cheering them on at their summer sports events. Her final four winters were spent in sunny Arizona with daughter Karin and son-in-law Michael. And her favorite times in life were Ibsen family gatherings.