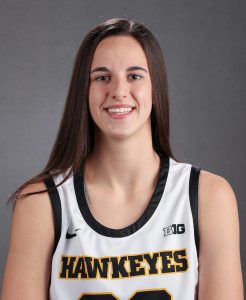 In two games last week, Clark, a Des Moines, Iowa, native averaged 30.5 points, 8.5 assists, and 5.5 rebounds. In both games, she filled her stat line, adding two blocks and three steals on the week.

Clark drew 18 fouls, making it to the free-throw line 22 times. Against Northwestern, she was a perfect 13-for-13 — her second perfect game over with 10-free throws or more — and missed just one of her nine free throws at Nebraska.

At Pinnacle Bank Arena in Lincoln, Nebraska, Clark registered her sixth double-double of the season and the 16th of her career.

Clark and the Hawkeyes return to action Thursday, Jan. 13 in West Lafayette, Indiana, as they take on the Purdue Boilermakers inside Mackey Arena. Tip is set for 6 p.m. (CT) on B1G+.