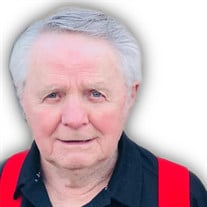 Family will be having a Memorial Service at 10:30am, Saturday, January 8th at the Trinity Lutheran Church, 213 N Pennsylvania Ave, Mason City, IA with lunch following at the church.

George was born on May 1, 1934, the son of Clifford and Doris (Bower) Marson of Mason City. He had one sister, Joanne Hjelle. He proudly served time in the Air Force during the Korean War, as a heavy equipment drop operator. After George was honorably discharged from the Air Force, he began his trucking career. George started as an OTR driver for Plaggue Trucking company of Mason City. He left Plaggue Trucking company and became a machine operator at Curries Manufacturing. Before retiring from Curries, he became a local driver for Curries and retired at the age of 65. George’s retirement was short lived. Not long after, he fulfilled his lifelong dream of being a owner/operator of his own semi and drove from coast to coast until the age of 82.

George loved to go camping, playing cards, loved to spend time with his family and friends, and he really liked being the “jokester” and always making people laugh. But most of all, he loved serving his country and riding motorcycles. He loved riding motorcycles so much that he drove to all of the four corners of the US on his bike to beat the Guinness Book of World Records in 1988. George beat the world record and his time was 10 days,15 hours, 28 minutes for a total of 8,403 miles.

The things George loved and was most proud of were his children, his grandchildren, proudly serving his country, being a “trucker” and his 47 years of sobriety.

George is preceded in death by his parents Doris and “Benny” Marson; sister, Joann (Oscar) Hjelle, mother of his children Judy “Babe” (Marson) Adams, step-son Randy Smith and grand-daughter, Bethany Ann and many more loved ones.