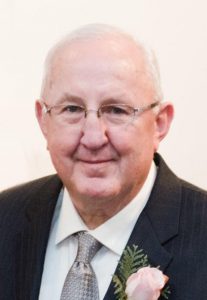 Robert Lee Van Hove, 76, of Buffalo Center, Iowa, died November 28, 2021, in Waxahachie, TX after a courageous battle with Alzheimer’s disease. A funeral service will be held Monday, December 6, 2021, at 10:30 AM, at Ramsey Reformed Church in rural Titonka. Burial will be in the church cemetery with military honors conducted. His family will greet friends one hour prior to the service at the church on Monday.

Robert was born on October 25, 1945, in Buffalo Center, Iowa to Henry and Dorothy (Intermill) Van Hove. Bob attended Titonka Community Schools until the 8th grade and then completed his GED as an adult. He married his childhood sweetheart Judith Seaberg on September 25, 1965, in Wesley, Iowa. Shortly after, he was drafted to the Army and was stationed in West Germany. Judy joined him in West Germany where their oldest son Rick was born. After returning to the family farm in Buffalo Center, Iowa, they raised 3 children, Rick, April and Matthew.

Bob farmed until the late 1980’s and then began working at Winnebago Industries until he retired. He was active in the Ramsey Reformed Church and would share with anyone the importance of having a personal relationship with Jesus. He started a Saturday morning men’s Bible study, taught Sunday School, sang in the church choir, served on the Consistory and affirmed the standing pastor’s sermons with many Amens! Bob was proud to support Right to Life by displaying lighted billboards on his property.

Condolences and memorials may be sent in care of his daughter, April Eimers, 638 Julissa Drive, Peosta, IA 52068.