This news story was published on September 30, 2021.
Advertise on NIT • Subscribe to NIT 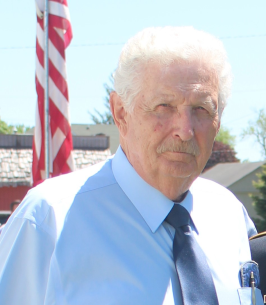 Larry Lee Bierstedt, the son of Clarence and Clara (Kressin) Bierstedt was born January 1, 1945, in Algona, Iowa. He died on Tuesday, September 28, 2021, at St. Mary’s Hospital in Rochester, Minnesota at the age of 76.

He received his education and graduated from Sentral High School. He then attended Iowa Lakes Community College and the Iowa State Farm Program. Larry served in the Iowa Air National Guard for six years during Vietnam.

On January 29, 1967, he was united in marriage to Janean Zwiefel at the United Methodist Church in Fenton. The couple farmed in rural Fenton for many years. Larry also served on various boards including the Fenton Coop, President of State Line Coop for 12 years, Secretary of Fenton Telephone Company for over 25 years, and he played baseball for the town of Fenton and Lone Rock. Larry enjoyed reading westerns, watching old westerns, golf, bowling, and the Minnesota Twins. Larry was very active in the Ranney-Weisbrod American Legion.

He has been preceded in death by his parents, sisters, Clara Bierstedt and Phyllis (Darrel) Dreyer and nephews, Roger Bierstedt and Kim Dryer

In lieu of flowers, the family suggests memorials to the Ranney-Wisebrod American Legion Post #627.