This news story was published on September 5, 2021.
Advertise on NIT • Subscribe to NIT

CHARLES CITY – A wanted Charles City man was snared by cops this week. 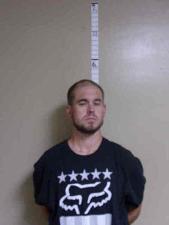