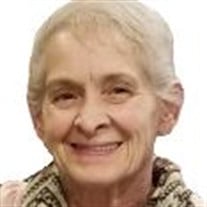 Visitation will be held 12:00 p.m. to 2:00 p.m. Sunday, May 23, 2021 at Hogan-Bremer-Moore Colonial Chapel, 126 3rd Street NE, Mason City.
Memorial contributions may be directed to the Senior Center in Mason City or to Hospice of North Iowa in Mason City.

Peg was born October 3, 1948, daughter of Thomas and Leona (Helin) Rafferty. She attended St. Joseph Catholic School and graduated from Newman Catholic High School, class of 1967. After high school, she worked at Good Shepherd as a Nurse’s Aide for many years. She met her husband, Clifford Davis, while working at KFC. Peg was united in marriage to Cliff in 1969 in Mason City and to this union two sons were born, Jeff and Scott Davis. While raising her family, Peg worked various retail jobs in the Mason City area, retiring in 1993, so she could focus on spoiling her grandchildren.
Peg and Cliff moved to Cartersville, Iowa, purchased an acreage and loved making sure the lawn was well manicured and having her fire pit blazing in the evenings. After Cliff’s passing in 2017, Peg moved back to the Mason City area.

Peg enjoyed painting pottery, collecting angels and doing crossword puzzles. She loved taking care of her animals throughout the years. Peg looked forward to spending time with her family and spoiling her grandchildren. She was always very vibrant and energetic until health issues slowed her down.