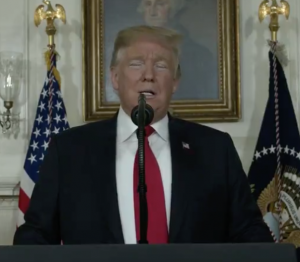 Gallup reports that 38% of respondents currently approve of the job Donald Trump is doing as president. There is a record partisan gap, with 91% of Republicans, 2% of Democrats approving. Trump’s job approval rating is down among most demographic groups.

Trump’s all-time low of 35% was registered on four separate occasions in 2017, Gallup says.

The latest results are based on a June 8-30 Gallup poll.

Gallup compared Trump to past presidents who faltered in their attempt at a second term.

“The drop in Trump’s job approval rating puts him in the company of George H.W. Bush and Jimmy Carter — the last two one-term presidents, who also had sub-40% approval ratings in June of their reelection years.”