This news story was published on March 31, 2020.
Advertise on NIT • Subscribe to NIT 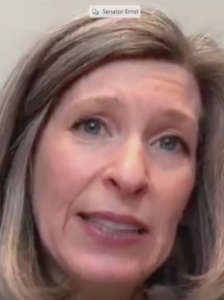 Joni Ernst appeared in Governor Kim Reynolds’ press conference to take credit for aid to workers that she voted against.

DES MOINES – An Iowa advocacy group has rightly pointed out that Senator Joni Ernst is taking credit for paid sick leave for workers that was included in the Coronavirus stimulus package even though she voted to strike it from the bill.

Her vote is on the record at www.senate.gov.

Watch the press conference, here, where Ernst takes credit for the aid to workers that she voted to strike from the bill.

“It is the height of hypocrisy for Senator Ernst to tout critical paid sick leave just days after voting to strip it from the coronavirus legislation. Iowans are demanding that their Senator be honest about her record, which also includes voting repeatedly to increase health care costs for our families.

“At a time when Iowa’s coronavirus infections are rapidly rising, Senator Ernst continues to vote against the best interests of the Iowans she was elected to represent. From voting twice to support a secret slush fund for big corporations, to voting to restrict unemployment benefits as jobless claims reached record levels last week, this is the latest example of Senator Ernst putting her special interest donors ahead of Iowans.”