This news story was published on March 7, 2020.
Advertise on NIT • Subscribe to NIT

DAVENPORT – An Iowa man fired a gun at police after an armed robbery and fled into a corn field, but authorities were able to use a drone to locate and arrest him.

Around 9:50 pm on Friday, March 6, 2020, Iowa County sheriff deputies responded to a car on fire near the 226 mile marker of Interstate 80 in Iowa County. Upon arrival, deputies found a 1996 Oldsmobile burning that had been stolen out of Davenport, Iowa. It was also learned the Oldsmobile had been involved in an armed robbery earlier in the day in Davenport. Deputies and officers from several agencies searched for the driver for several hours to no avail.

At 5:42 am the next morning (Saturday), Iowa County Deputies located a subject walking on Interstate 80 near the 225 exit. This was after receiving public reports of a man walking along the interstate getting dangerously close to traffic. When the deputies attempted to make contact, the male pulled a hand gun on officers and ran into a farm field. Several officers from area agencies assisted in the attempt to locate the male.

A few minutes after the initial contact, the male subject fired a handgun at a patrol vehicle, shattering the rear window and nearly striking an Iowa Department of Natural Resources Conservation Officer and a Johnson County Deputy Sheriff.

The male was able to hide by crawling onto a culvert located within a farm field. An Iowa County Emergency Management aerial drone was utilized to identify the male’s location. Tactical officers from Johnson County Metro SERT, Linn County Sheriff and the Iowa State Patrol responded to the scene. The male fired another shot in an apparent attempt to keep officers at bay. The male also started several small fires in the grassy area surrounding the culvert.

Armored vehicles from the Johnson and Linn County Sheriff’s Offices were used to approach the culvert area, at which time the male surrendered to officers without further incident.

The male, now identified as Jeremy Lee Krapp, age 31, of Davenport, Iowa, has been charged with two counts of attempted murder, two counts of assaulting peace officers while displaying a firearm, one count of a felon in possession of a firearm, and possession of a controlled substance.
Jeremy Krapp is being held in the Iowa County Jail awaiting an initial appearance. 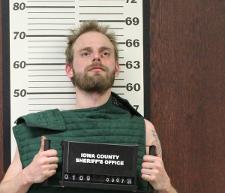