This news story was published on February 14, 2020.
Advertise on NIT • Subscribe to NIT 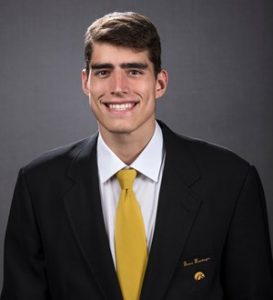 Garza is one of 12 semifinalists for the Oscar Robertson Trophy and one of 30 players listed for the Naismith College Player of the Year Award. The Oscar Robertson Trophy is awarded annually to the most outstanding men’s college basketball player by the United States Basketball Writers Association (USBWA), while the Naismith Trophy is presented annually to the most outstanding player who achieves tremendous on-court success.

The Big Ten leading scorer for most of the season has totaled 555 points, the most by a Hawkeye to start a season in 49 years. He is the first Hawkeye since Fred Brown in 1971 to score 20+ points in nine straight Big Ten games. Garza is one of two centers in the nation shooting 38 percent or better from 3-point range (min. 75 attempts).

In March, the USBWA will announce its 2019-20 All-America Team and, at that time, finalists will also be chosen for the player of the year. The Oscar Robertson Trophy will be presented at the NCAA Final Four in Atlanta in April and the winner will be honored at the USBWA Awards Dinner on April 13 at the Missouri Athletic Club in St. Louis.