CEDAR FALLS – Megan Maahs scored a career-high 23 points including eight points in overtime to lead UNI to a 71-66 win over Southern Illinois Sunday afternoon at the McLeod Center.

The performance was one Panther fans have hoped for since Maahs went down with an injury early last season and was again injured in the conference opener against Drake. She added 12 rebounds and 2 blocks for her first double-double since Nov. 20, 2018.

It was a back and forth battle from the opening tip. Neither team led by more than eight points. SIU jumped out to a 7-2 lead, but the Panthers responded with a 6-0 run to take an 8-7 lead. After trading buckets, the Panthers took a 10-9 lead into the second quarter.

The Panthers started the second with an 8-2 run, all coming from Bre Gunnels, to give UNI an 18-11 advantage, but SIU rattled off a 7-0 run to tie the game at 18. The Salukis took a 30-28 lead at the half with a three-pointer on their final possession.

The Salukis built a 48-40 lead with 3:00 to play in the third quarter, but the Panthers battled back to cut the deficit to 50-47 after three quarters.

UNI started the fourth SIU led by one in the final seconds, but Maahs gathered a rebound with 16 seconds left and was fouled. She hit a free throw to tie the game and send it to overtime.

Maahs continued her scoring streak, scoring UNI’s first six points in the overtime to put the Panthers up 66-61 with 3:02 to play. SIU battled back to tie the game at 66-66 with 59 seconds left in the game.

The Salukis missed seven shots in the final minute and UNI went 4-5 from the free-throw line and picked up the five-point win.

The win moves UNI to 6-5 in MVC play and 14-8 overall. SIU falls to 13-9 overall and 5-6 in MVC. The Panthers are now tied with Loyola for the fourth spot in the conference standings with seven games remaining in the season.

NOTES
– Megan Maahs recorded a career-high 22-point game. Her previous best was 18 which she did twice. The last time being against Missouri on Nov. 13.
– Bre Gunnels tied her career-high of 14 points. The last time she scored 14 points, was just last month in a win against Indiana State. – Bre Gunnels started the game 8-8 from the free-throw line and finished the game 9-10.
– The Panthers were 11-11 from the free-throw line in the first half.
– Megan Maahs scored her first double-double since a 65-55 win over Creighton on Nov. 20, 2018.
– Megan Maahs and Bre Gunnels combined to go 22-24 from the free-throw line.
– Head coach Tanya Warren and SIU head coach donated $25 for each made three by their respective three-pointers made. UNI made four three-pointers and SIU made seven for a combined total of $275 for Cedar Valley cancer support group Beyond Pink TEAM.

UP NEXT
The Panthers are set to take the road after consecutive home games. The Panthers make the Indiana trip and will face Indiana State Thursday and Evansville Saturday. 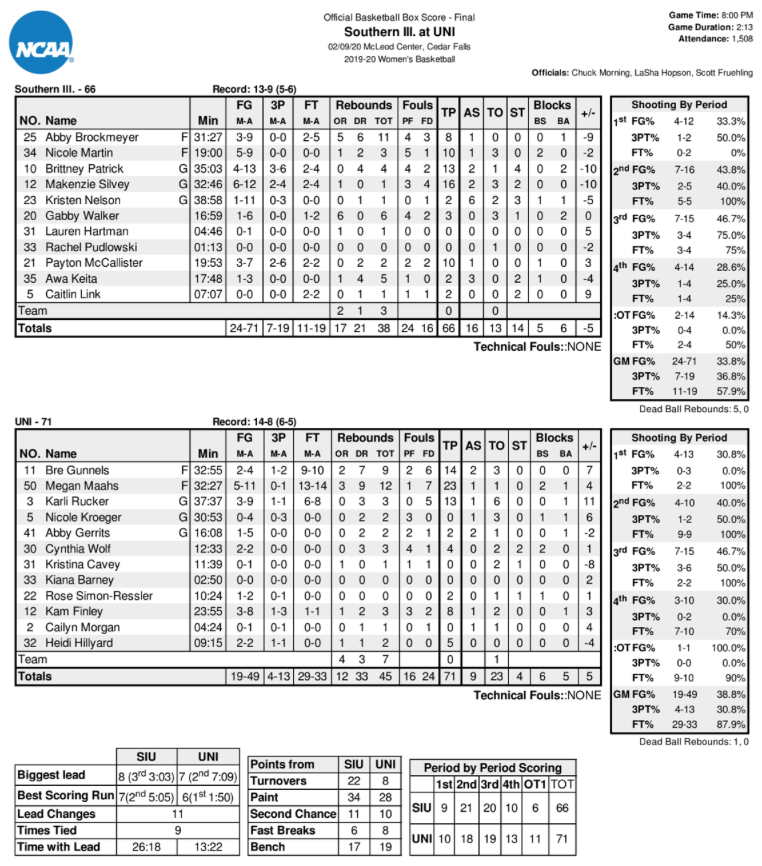