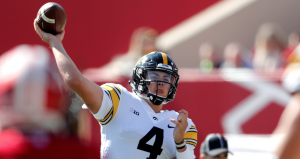 IOWA CITY – University of Iowa senior quarterback Nate Stanley has been named one of 10 finalists for the Johnny Unitas Golden Arm Award, which is presented annually to the top senior or fourth-year quarterback in the nation. He is the only Big Ten quarterback on the list.

Stanley (6-foot-4, 243-pounds) leads the Big Ten with 1,950 passing yards, with a 60.7 (159-of-262) completion percentage. The Menomonie, Wisconsin, native has thrown 10 touchdown passes this season to bump his career total to 62, which ranks second all-time in program history.

Ricky Stanzi was a finalist for the award in 2010.

Iowa football hosts Minnesota in the battle for Floyd of Rosedale on Saturday, Nov. 16.  Fans are encouraged to wear black for the Blackout game, and it is the annual military appreciation celebration. Active duty military and veterans are eligible for a military ticket discount.