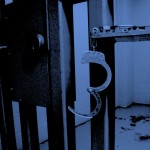 PALO ALTO COUNTY – An Emmetsburg couple was busted with drugs recently, and taken to jail.

Two Emmetsburg residents were arrested as the result of a traffic stop recently in rural Emmet County. According to Emmet County Sheriff Mike Martens, a traffic stop was initiated on a vehicle 2200 block of 440th Avenue near Ingham Lake to investigate a traffic violation September 27, 2019 at 2:25 PM.

Both were transported and booked into the Emmet County Jail without incident.