Opinion: ‘The Clock is Ticking’

People always wonder how Hitler managed to get into power: “How could the Germans vote for him, how could they let that happen.”

The words of smiling middle class worker bees who believed Obama when he preached “Hope” and “Change.” Meanwhile he was cashing his Wall Street pay checks faster than you can say “Our first African American President!”

We’re nowhere near the level of desperation the German people were at during the rise of Hitler; and we still ended up with Trump.

Just you wait. Just you wait til the real economic collapse that’s coming in the next few years hits. It’ll make the Great Recession look like too long a night at the local dive bar. “Drinks are on the taxpayers Mr. Merrill Lynch!”

Remember that student loan bubble? Who the fucks paying that tab? “Were looking at you 30-year-old millennials working at Applebees!” You guys noticing anything strange in this “boom economy?”

How about all the shopping malls and retail outlets closing out. Maybe a little worrisome that the majority of young people are working as “freelancers” huh? How about that fact that CEO pay has skyrocketed over the last three decades while wages have flatlined? All I’m saying is I ain’t heard one mother fucker my age say nothing about owning a house.

And just you wait til the climate crisis causes ecological collapse and mass migration towards the northern hemisphere. That’ll be the real kicker boys and girls. Who would’ve thought World War III would be over water and arable water instead of fossil fuels and tech minerals?

I won’t be surprised to see the same people who are crying over Trump now, foaming at the mouth; begging a mad man to dissolve democracy in exchange for work and shelter.

“Please! Please! You can fuck America in the ass all you want just give me something to eat!!!”

Let’s wait and see. Like you’ve been waiting to see for the last thirty years.

“We got at least another five years, right? Maybe even a decade!!!”

I’ll see you when the party’s over. 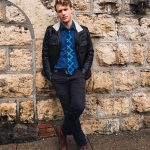 29 Responses to Opinion: ‘The Clock is Ticking’