This news story was published on September 17, 2019.
Advertise on NIT • Subscribe to NIT 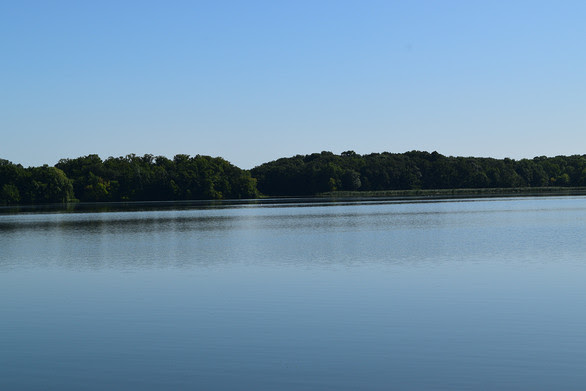 LAKE MILLS, Iowa – Trevis and Kris Erickson saw as business opportunity emerge 150 feet from the front of their new home.

The couple had moved to a place on a busy blacktop about halfway between Rice Lake and Silver Lake where they watched a steady stream of boats go back and forth between the lakes. Fishing had been on the uptick at Rice Lake since the lake renovation in 2015 and anglers had to drive to either Clear Lake or Albert Lea, Minn. to get live bait.

Why wasn’t there a local bait shop? Because before the renovation Rice Lake suffered from poor water quality, a fish population dominated by bullheads and little use.

To fix Rice Lake, the water was lowered before ice up, its fish population was eliminated and the outlet structure was replaced.

Once the lake filled, aquatic plants returned. A mix of yellow perch, bluegills, largemouth bass and walleyes were stocked. Ducks and geese found the high quality vegetation and were drawn like magnets.

Each year since, fishing got better, fish got bigger, ducks poured in and the word got out.

“We got tired of driving to Clear Lake or Albert Lea for bait,” said Trevis Erickson. So, in 2017, they opened Tie 1 on Bait Shop on their acreage offering minnows and night crawlers in the summer and spikes, wax worms and minnows in the winter.

And area anglers are glad they did.

There’s a logbook in the bait shop signed by anglers from surrounding towns, from Northwood and Buffalo Center, from Austin and Albert Lea, Minn., and from Des Moines.

There’s an energy that’s been here since the renovation: fishing, duck hunting, deer and pheasant hunting. Paddling and pleasure boating has increased and bird watchers converge during the spring and fall migration.

“It’s attractive to a lot of people,” said TJ Herrick, wildlife biologist with the Iowa Department of Natural Resources, who along with fisheries biologist Scott Grummer are responsible for managing Rice Lake and the surrounding wildlife area. And, Herrick said, the excellent water quality has been the driver. “We see a lot more people using the lake since the project and that was the goal,” he said.

Today, Rice Lake can get more use in one day than it did in an entire season before it was fixed. The improved water clarity has benefited aquatic plants above and below the water surface to the point that even on the windiest day, there are no whitecaps. It’s common to hear reports of 12-inch perch and an occasional walleye coming through the ice.

Rice Lake pulled a vanishing act in the early 1900s.

The lakebed was deemed too valuable to remain underwater by the State Highway Commission and was drained so it could be farmed. For nearly 15 years, area farmers struggled to till and crop the former lakebed.

In 1917, the commission referred to the draining of Rice Lake as a failure and wrote that it would be more valuable if the lake was returned and used as a breeding area for water birds. With 800 acres still under the state, they would need to reacquire 300-400 additional acres to secure the land that would be impacted by holding water. Engineers began placing dikes between specific islands to return the 1,200-acre lake to the landscape.