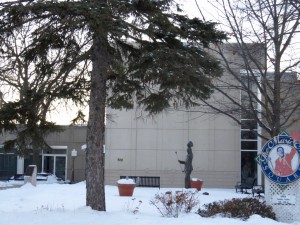 MASON CITY – The New Horizons Band will present its annual spring concert and ice cream social on Tuesday, May 14, 2019 at 4:00pm at the Music Man Square, 308 S. Pennsylvania Ave, Mason City. In honor of Meredith Willson’s birthday, on May 18, the ice cream social will be held at the conclusion of the concert. The concert, which features a variety of musical styles, is free and will be held in Reunion Hall.

The first New Horizons Band was founded in 1991 and was sponsored by the Eastman School of Music, Rochester, New York. The New Horizons Band at Music Man Square started in October, 2004 with seven members. We now have over 50 members. Today, affiliate bands number over 210 throughout the United States, Ireland, and Canada.

The band welcomes area players of all ages. Rehearsals for full band are held on Wednesdays, with an optional small group rehearsal on Tuesdays. The first rehearsal for the summer session will be Wednesday, June 5, 2019 at 3:30pm. The band’s director is Bernie Bjorklund, long-time band director in the Nora Springs-Rock Falls Schools. Further information is available at 641-420-7640.