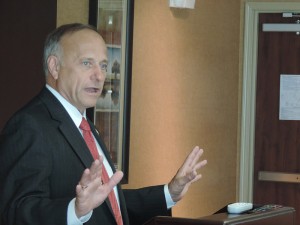 Steve King, speaking in Mason City back in 2014

“Today, the New York Times is suggesting that I am an advocate for white nationalism and white supremacy,” King said in a Thursday statement in response to the story.

“I want to make one thing abundantly clear; I reject those labels and the evil ideology that they define. Further, I condemn anyone that supports this evil and bigoted ideology which saw in its ultimate expression the systematic murder of 6 million innocent Jewish lives. It’s true that like the Founding Fathers I am an advocate for Western Civilization’s values, and that I profoundly believe that America is the greatest tangible expression of these ideals the World has ever seen. Under any fair political definition, I am simply a Nationalist. America’s values are expressed in our founding documents, they are attainable by everyone and we take pride that people of all races, religions, and creeds from around the globe aspire to achieve them. I am dedicated to keeping America this way.
This conviction does not make me a white nationalist or a white supremacist. Once again, I reject those labels and the ideology that they define. As I told the New York Times, ‘it’s not about race; it’s never been about race.’ One of my most strongly held beliefs is that we are all created in God’s image and that human life is sacred in all its forms.”

King was in the news the previous day after another Republican challenger emerged for the 2020 election primary.