This news story was published on November 20, 2018.
Advertise on NIT • Subscribe to NIT 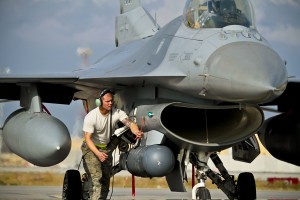 In coordination with the Federal Government of Somalia, U.S. forces conducted two (2) airstrikes in the vicinity of Debatscile, Somalia targeting al-Shabaab militants on November 19, 2018.

AFRICOM currently assess these airstrikes did not injure or kill any civilians.

These precision airstrikes were conducted in support of the Federal Government of Somalia as it continues to degrade al-Shabaab. Airstrikes reduce al-Shabaab’s ability to plot future attacks, disrupt its leadership networks, and degrade its freedom of maneuver within the region.

Alongside Somali and international partners, AFRICOM are committed to preventing al-Shabaab from taking advantage of safe havens from which they can build capacity and attack the people of Somalia. In particular, the group uses portions of southern and central Somalia to plot and direct terror attacks, steal humanitarian aid, extort the local populace to fund its operations, and shelter radical terrorists.

The desired end state in East Africa is one in which terrorist organizations cannot destabilize Somalia and its neighboring states, nor threaten the interests of the U.S. and its international allies in the region. Accordingly, U.S. Africa Command will continue to work with its partners to transfer the responsibility for long-term security in Somalia from the African Union Mission to Somalia (AMISOM) to the Federal Government of Somalia and its Member States.

United States Africa Command, (U.S. AFRICOM) is one of six of the U.S. Defense Department’s geographic combatant commands and is responsible to the Secretary of Defense for military relations with African nations, the African Union, and African regional security organizations.

2 Responses to U.S. forces conduct airstrikes in Africa, killing up to 37 possible terrorists