MASON CITY – A Mason City man who is no stranger to a jail cell was arrested this weekend for drunk driving and faces a felony charge for the second time.

A Cerro Gordo county deputy stopped a vehicle with a bad brake light late on the evening of Saturday, February 17, near 825 15th Street SE. After an investigation, the driver, 33-year-old Brandon Ben Ward, was found to be driving with a revoked license. He was also found to be intoxicated.

Ward was arrested and charged with felony third-offense operating while intoxicated and driving while revoked. He was taken to the county jail and remains held there as he awaits a court date.

Ward has a number of drunk driving convictions and last faced a felony drunk driving charge in May of 2016. That charge was dismissed, as was a charge of assault. He later ended up spending 60 days in jail and was assessed $1,592.00 in fines and court fees. 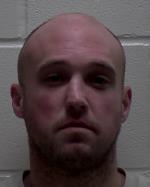