CEDAR RAPIDS – A Mexican man who had previously been deported following state convictions for domestic abuse and false imprisonment and returned to live in Iowa was sentenced to 112 days in federal prison.

Efren Palacios-Ramirez, age 29, a citizen of Mexico who had been living in Polk County, Iowa, received the prison term after a November 16, 2017, guilty plea to one count of illegal reentry of a removed alien after a felony conviction.

At the guilty plea, Palacios-Ramirez admitted he illegally reentered the United States without permission after having been deported from the United States in December 2012.  Prior to his deportation, Palacios-Ramirez was convicted in Polk County, Iowa, of theft 5th degree in April 2012, and of domestic abuse and false imprisonment in October 2012.  At the time of his arrest in October 2017, Palacios-Ramirez provided law enforcement a false name and his true identity could not be verified until his fingerprints were analyzed by immigration officials.

Palacios-Ramirez is being held in the United States Marshal’s custody until he can be turned over to Immigration and Customs Enforcement. 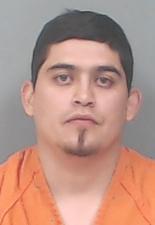