FORT DODGE – An Iowa  woman is facing attempted murder charges after she allegedly was driving drunk as she intentionally accelerated her vehicle and ran down a pedestrian this past weekend in Fort Dodge.

On Saturday, January 27, 2018, at approximately 1:00 AM, the Webster County Communications Center received a call indicating a pedestrian was struck by a vehicle near the intersection of Central Ave and 10th Street, and the vehicle had left the scene. Officers with the Fort Dodge Police Department, along with Fort Dodge Fire and Unity Point – Trinity Regional Medical Center, responded to the scene. The individual that was struck was then transported to the hospital for treatment.

Witnesses on scene were able to give a detailed description of the vehicle. A short time later, officers located a 2006 Chrysler Sebring at 707 7th Ave North in Fort Dodge. At that time, an operating while intoxicated investigation was completed on the driver. As a result of that investigation, 27-year-old Leah Corvine of Fort Dodge was arrested for first-offense operating while intoxicated.

The investigation continued over the next several days. As the investigation developed, information was obtained indicating that Ms. Cervene intentionally struck the victim with her vehicle. Witnesses indicated that as the victim was crossing Central Ave, Ms. Cervene accelerated towards the victim, striking them, and then left the scene. Based on the information obtained to this point, Ms. Cervene was arrested on January 31, shortly after 7:00 P.M. on a charge of Attempted Murder – B Felony.

Cervene is scheduled to make her initial appearance in court at 9:00 A.M., February 1, in Webster County Magistrate Court.

The Fort Dodge Police Department is continuing to follow up on information regarding this case, and more charges may follow. 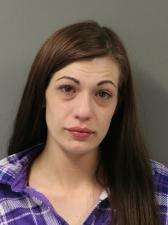