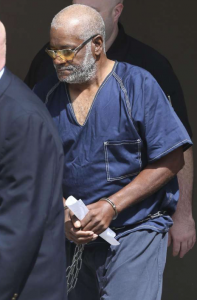 SAN ANTONIO — The driver of a tractor-trailer with Iowa ties was charged Monday with one count of transporting illegal aliens, after 10 aliens died when they were smuggled in his truck on Sunday.

A federal complaint filed July 24 alleges that James Matthew Bradley Jr., 60, unlawfully transported aliens in violation of law resulting in the death of 10 of the aliens transported. The tenth alien, an adult male, died overnight at a hospital. Upon conviction, the offense is punishable by life imprisonment or death, a $250,000 fine, and three years of supervised release.

According to the complaint affidavit filed by HSI Special Agent James Lara, San Antonio Police Department (SAPD) officers responded to a call at the Wal-Mart store located at 8538 Interstate 25 Access Road in San Antonio shortly after midnight on Sunday, July 23. An officer encountered a tractor trailer behind the store, and found a number of people standing and lying in the rear of the trailer; and the driver, Bradley, was in the cab. Bradley said he was transporting the trailer from Schaller, Iowa, to Brownsville, Texas. He denied knowing there were people in the trailer, and discovered them only when he exited the vehicle to relieve himself. He said he attempted to administer aid to them. SAPD officers reported they found eight deceased persons and 30 to 40 others, all illegal aliens. The driver, Bradley, was taken into custody.

During questioning, Bradley said he was traveling from Laredo to San Antonio, after having the tractor trailer washed and detailed at a truck stop near Laredo. He intended to take the trailer to Brownsville to deliver it to someone who had purchased it. He stopped at the Wal-Mart and heard banging and shaking in the trailer. He was surprised when “he was run over by ‘Spanish’ people and knocked to the ground,” according to the affidavit. He realized that at least one person was dead. He said he knew the trailer refrigeration system did not work and that the four vent holes probably were clogged. He said he called his wife, but he did not call 911. He said about 30 to 40 people ran from the trailer.

Several of the illegal aliens taken from the trailer and interviewed by HSI special agents described how they had been smuggled across the Rio Grande River near Laredo at different times and as part of different groups. They were harbored in one or more stash locations, and on Sunday, the groups were assembled in the trailer. One alien said his group of 24 had been in a “stash house” in Laredo for 11 days before being loaded into the trailer. They estimated the trailer contained between 70 and 180 to 200 people during transport. They described differing fees for being transported.

“To maximize their criminal profits, these human smugglers crammed more than 100 people into a tractor trailer in the stifling Texas summer heat resulting in 10 dead and 29 others hospitalized,” said Acting ICE Director Thomas Homan. “Human smugglers have repeatedly demonstrated that they have absolutely no regard for human life. Our ICE agents and officers, working closely with our law enforcement partners, will pursue these smugglers and bring them to justice.”

An initial appearance for Bradley is scheduled before U.S. Magistrate Judge Elizabeth S. Chestney at 11 a.m. on July 24.

U.S. Immigration and Customs Enforcement’s (ICE) Homeland Security Investigations (HSI) is leading this investigation together with ICE Enforcement and Removal Operations, the San Antonio Police Department and the San Antonio Fire Department, with assistance from the Bexar County (Texas) Sheriff’s Office, and the U. S. Customs and Border Protection’s Border Patrol.

It is important to note that a criminal complaint is merely a charge and should not be considered as evidence of guilt. The defendant is presumed innocent until proven guilty in a court of law.