MASON CITY – A Rockwell man already convicted of felony drunk driving got behind the wheel of a vehicle and did the deed again.

John William Awe was tooling down Federal Avenue in Mason City Friday evening, July 21 at about 7 PM with a faulty brake light when an alert Cerro Gordo county deputy stopped and pulled him over. The deputy noticed that Awe had himself an open container of booze, and soon discovered that Awe has a revoked driver’s license due to at least three previous drunk driving convictions that include a felony. Awe was placed under arrest and taken to the Cerro Gordo county jail for processing. He was soon released, pending a court date.

Awe was last convicted of drunk driving in Cerro Gordo county in 2011 after Mason City police charged him. He was given a suspended 5-year prison sentence and just 30 days in jail. He paid $4,579.75 in fines and court fees.

He was also guilty of drunk driving in 2007 and 2001, both times in Cerro Gordo county. 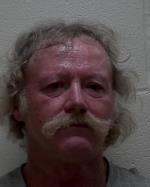