MASON CITY – A convicted burglar who spent time in prison for his previous crimes was back at in Mason City this weekend – but cops quickly put a stop to his hijinks.

Mason City police tell NIT that 22-year-old convicted felon Trey Michael Stack was arrested after officers found him acting suspiciously near the hallowed downtown area and stopped to talk to him. Mason City chief of police Jeff Brinkley says Stack “had dumped a power tool that he had been carrying.” During the ensuing investigation, “officers were able to find the vehicle the tool had been taken from and the owner verified it. Stack was also in possession of drugs/paraphernalia at the time of his arrest.”

Stack was taken to the Cerro Gordo county jail on charges of felony third-degree burglary, possession of burglar’s tools, drug and paraphernalia possession. He remains held there on $8,000 bond. He’ll appear in court July 28.

Among other crimes, Stack was convicted of felony burglary in Mason City back in 2013 and later sent to prison in 2014 after he violated his probation in the case. Records show his parole from prison was revoked in September of 2016. 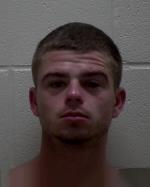