CHARLES CITY – A Charles City sex offender living in low-income housing who pointed a gun at another person and got a deferred judgement is accused of violating his probation in that case.

The trouble for 22-year-old Cornelius Marsha Phillips began on the morning of August 7, 2016, when Charles City police were called to the area of the 2100 block of Clarkview Drive, home to the Morningside Apartments. Officers arrived at about 12:45 AM to investigate the disturbance, which involved an alleged assault and a person with a gun. Officers spoke to the parties involved, but no gun was located. Officers left when the people there refused to cooperate. Then, later that same afternoon, police were called back to the 2100 block of Clarkview Drive, this time on a report of a person pointing a gun at another person. As a result of this police response and investigation, Phillips was arrested on two felony charges of going armed with intent.

As a result of a plea deal, Phillips was given a deferred judgement to just one count of felony going armed with intent. He was put on probation for 3-5 years.

However, on the morning of Tuesday, July 18, 2017, Charles City police sought and arrested Phillips near his home in the 2100 block of Clarkview Drive on arrest warrants. He is accused of violating his probation in the above going armed with intent case.

Phillips, who is listed with up to four name aliases, remans jailed as he awaits a court appearance. He was convicted of felony third-degree sexual abuse in January of this year in Floyd county after county prosecutors there filed the charge in October of 2016. He was given probation in that case, too, and stands accused of violating that probation by violating the state’s sex offender registry. He will face a plea hearing in that case in August. 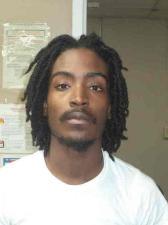