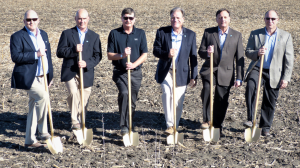 EAGLE GROVE – Robots will be used in the Prestage Foods slaughterhouse under construction outside Eagle Grove, a company official tells the media, potentially altering the number and use of employees at the plant.

Prestage Foods of Iowa, LLC has officially broken ground to begin construction of its new fresh pork processing plant, though no ceremony was held, the company said March 31.

“With the initial engineering complete, we are excited to be moving into the construction phase of this project,” said Jere Null, COO of Prestage Foods of Iowa.  “At the peak of construction, we expect over 600 people to be working daily at the site.  After construction, we will permanently employ approximately 1000 people.  We are proud to be investing and creating opportunities for the people of Wright County, the region and the State of Iowa.”

As the plant begins to take shape, new details are emerging about the operation. 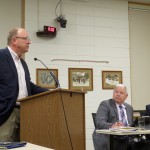 KIOW radio reports that Null is now saying “plans to use advanced robotics for many processes” are in the works.  “Null said that the robots are expected to ease the burden on employees and improve efficiency,” according to the radio station.

The Charlotte Observer, via the AP, reported more in-depth about possible changes to uses of employees at the plant, saying:

“Imagine you take several frames of a carcass coming by and the computer can distinguish lean from bone from fat,” he said. “It can tell that robotic arm exactly how to cut based on what it’s looking at.”

Robotics will change the type of skills needed in employees, shifting the focus to electronic engineers who can help program and maintain the robots, Null said.

“A lot of the precision cutting we are doing is moving towards robotics,” he said. “What would have previously been a laborious, back-breaking type job like holding a heavy saw and cutting and things like that can now be done by a robot.”

Prestage Farms currently raises pigs in over 30 Iowa counties, the company says on its website.  The new facility will support these operations and will use state-of-the art systems to clean the air, reduce water and energy needs, provide a safe work environment, and will utilize the latest innovations in processing and automation technology to help ensure that it is a world leader in food, employee, and environmental safety.  With construction beginning, the new plant is set for first operations in the fall of 2018. 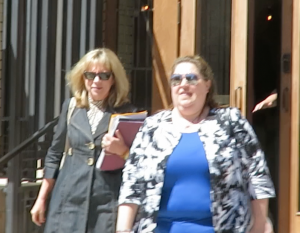 Losers in the fatal Prestage debacle that will go down in infamy.

Prestage Foods was chased out of Mason City back in 2016 after a spectacle for the ages was put on display by the company and their tentacles that infiltrated city hall, the Globe Gazette newsroom and the Chamber of Commerce, consisting of  mouthpieces Eric Bookmeyer, Robin Anderson and other questionable characters.  Once the public discovered the potential ramifications of the plant and the nasty deeds being conducted behind the scenes, Prestage, Bookmeyer and the notorious Chamber of Commerce were dealt a humiliating defeat in Mason City.  The plant was quickly approved, however, 80 miles southwest in Wright county.

44 Responses to Prestage slaughterhouse in Wright county to employ robots