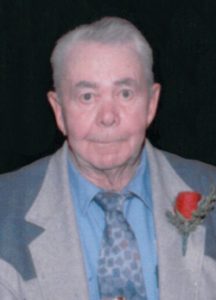 A funeral Mass for Wally Ritter will be held 10:30 a.m. Saturday, March 11, 2017 at Immaculate Conception Catholic Church in Charles City with Msgr. Carl Schmitt celebrating the Mass. Burial will be at Calvary Cemetery in Charles City.

Visitation will be at Hauser Funeral Home from 6:00-8:00 p.m. Friday, March 10, 2017 with a Scripture Service beginning at 8:00 p.m. Visitation will continue one hour prior to the funeral Mass at the church on Saturday.

Wallace William Ritter, the son of Leo and Marcella (Conley) Ritter, was born February 19, 1924 in Ionia, Iowa. He graduated from St. Boniface High School in Ionia. Wally joined the United States Army and proudly served until his honorable discharge. Wally was united in marriage to Lorraine Feltz on July 1, 1947 at St. Boniface in Ionia. The couple lived in several locations around the area before settling on the home place south of Charles City in 1956. Wally remained at home until his passing.

Wally worked several jobs throughout his life which included: Oliver Manufacturing, Vigortone/Beatrice Feeds, Railroad, A&B Elevator and selling Cargill Seed. The two jobs that Wally did for most of his life were farming (both livestock and field) and delivering Winnebago’s throughout the United States and Canada. He was able to see a lot of his family as he travelled delivering Winnebago’s.

Wally was a member of Immaculate Conception Catholic Church, Knights of Columbus and the American Legion. He enjoyed attending auctions and sale barns, playing cards (Huckleybuck at the Rockwell American Legion), fishing and travelling throughout the area to visit with family and friends. Wally and Lorraine were always welcoming others into their home with a warm smile and a hot pot of coffee.