MASON CITY – A Mason City woman was caught on an arrest warrant in Minnesota for dealing meth back here in Iowa and brought to jail.

Toleka Jeanette Juenger, age 33, is being held in the Cerro Gordo county jail on $25,000 cash-only bond on a charge of possession of methamphetamine with intent to deliver. Juenger was caught up in Mower county after a warrant for her arrest was issued on December 12 in connection to an incident here in Mason City on September 8 and the subsequent criminal charge brought by Mason City police.

Mason city police tell NIT that on September 8, 2016, MCPD officers arrested Juenger at 515 South Delaware Avenue. Juenger had a warrant for failing to appear in court for possession of drug paraphernalia charge. During Juenger’s arrest, she allegedly possessed several grams of suspected methamphetamine. Officers then applied for and executed a search warrant at her residence, 252 6th Place SE in Mason City, that same evening. More drug evidence was allegedly located and seized. A MCPD officer applied for an arrest warrant charging her with Possession with Intent to Deliver (a Class D Felony).

Juenger claims to be a local fast food worker, showing employment at Hardee’s and Taco Bell. On December 16, she submitted a letter to the court asking to be released from jail. She will get a bond review hearing on December 22. 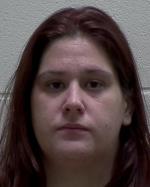