Mason City man says he was surrounded and beaten 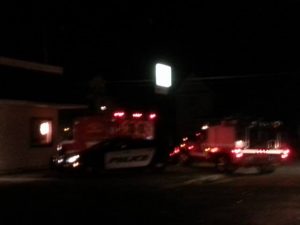 Police and ambulance near the scene early Saturday (submitted photo)

MASON CITY – A Mason City man suffered injuries that required hospitalization after he was surrounded by as many as ten men and then beaten unconscious, and wants the record set straight on what happened.

Earlier, NIT reported that as many as seven persons were involved in a confrontation and fight early Saturday morning, October 29, on the city’s North End, leading to a response from police and ambulance. Mason City police confirmed that there was an incident that morning at 1:58 AM. Police and fire medics were called to the west side of the 700 block of North Federal for an injured person.

“Apparently, 3 males got involved in an altercation with 4 subjects at this location,” NIT was told by a police spokesman. “One subject requested medical attention and was transported… It does not sound like patient’s injuries are life threatening.”

At that point, police told NIT that the injured male “and possibly more are uncooperative” with police efforts to investigate the incident, which is still on-going.

However, the alleged victim in the incident did contact NIT after reading our initial report and the version of events depicted by police. NIT won’t name the victim per his request, but he says that what the police reported was not accurate.

According to the young man who was allegedly attacked, “two groups did not duke it out … only one group of about ten males jumped (me) and took (my) wallet. The group circled me and jumped me. I did not fight, was just jumped. Happened that fast. In the process they got my wallet.  I was not able to speak with cops about this because of the state I was in.

“I was not trying to fight or up to no good was just walking.” He says he was with two friends at the time of the attack and the larger group of men chased his companions away.

He says after the beating, which left him unconscious, he was “taken to hospital … broke arm and sprained ankle … I was taken to ER and treated. I have cracked bone in arm, sprained ankle, face has marks on forehead nose and lip. Best way to put it is face looks like road rash.”

As he heals, the victim says he has missed work and could have a sizable hospital bill.

“Yes I will have a good size bill I’m thinking with all the x rays they gave me a cat scan and plus they gave me a (ambulance) ride. On top of that missed two days of work and on light duty.”

The victim says he is now cooperating with police. Mason City police didn’t immediately respond with an update in the case, but were previously seeking information from anyone who might have witnessed the incident. The phone number to the MCPD is 641-421-3636.