MASON CITY – Representative Sharon Steckman wants to make education a top priority in the the Iowa legislature in the next term beginning in January, but says the Iowa House will need a shake-up to do it.

According to a newsletter Mrs. Steckman sent this week: 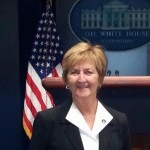 Democratic state lawmakers want to make education the top priority of the Iowa Legislature again. It will require a change in the make-up of the Iowa House.

Despite strong opposition from parents, school leaders, and many lawmakers, the House Majority party has shortchanged schools for several years in a row and many schools have been forced to cut teachers, increase class size, and raise property taxes. Iowa now ranks 35th in the nation in funding per student.

Last session, the Majority Party again refused to set school funding on-time as required by law so schools yet again will not be able to make timely budget decisions. Lack of funding also delayed requirements for summer reading and 3rd Grade Retention until the 2018-19 school year, and implementation of the Smarter Balanced Assessment was moved back to the 2017-18 school year.

In higher education, only slight increases to Iowa’s community colleges and three state universities were approved by the Governor and all were forced to raise tuition on students this year. Iowa graduates already accumulate one of the highest debts to go to college in the country, and these tuition increases will compound that problem.