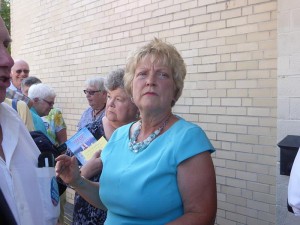 MASON CITY – Today, Senator Amanda Ragan had plenty to say about the Medicaid privatization implemented by Governor Terry Branstad after it was reveled that $33 million in additional corporate payout is needed for the program.

“Many correctly predicted Governor Branstad’s hasty handover of the state’s Medicaid health care system to for-profit, out-of-state companies would not be in the best interests of Iowans,” said Senator Amanda Ragan of Mason City, co-chair of the Health Care Policy Oversight Committee. “So far, Medicaid privatization has been a nightmare for hundreds of thousands of elderly and disabled Iowans and their families, as well as for thousands of local health care providers.

“In response, Governor Branstad wants Iowa taxpayers to reward the companies responsible by handing over even more tax dollars to them.”

“Republican legislators made a terrible mistake by refusing to join Democrats in our opposition to Governor Branstad’s Medicaid mess,” said Senator Liz Mathis of Robins, a member of the Health Care Policy Oversight Committee. “I’m concerned this new $33 million increase will be followed by demands for more money from the Wall Street firms now managing the health care of one in six Iowans.”

Yesterday afternoon we had our regular Medicaid forecasting meeting with DHS and DOM and although we are making some final adjustments to the number and the new forecast won’t be available for a week or two, there was important news that I wanted to share with you. Based on a review of recent Medicaid data by DHS and Milliman, the Administration has decided to increase the capitation rates paid to the MCOs by $33.2 million state ($94.5 million federal) for the first MCO contract time period spanning the final months of FY 2016 and FY 2017.

Capitation rates for the MCO contracts were originally developed using FY 2014 data and with only 6 months of Iowa Health and Wellness Program data and since this time there have been some major shifts in health care spending trends. Two of the major drivers are:

• When the capitation rates were developed the Iowa Health and Wellness Program was just getting started making it difficult to estimate the overall health of that population and the types of care and services they would need(inpatient hospital vs. outpatient hospital vs. physicians’ offices). Current spending trends the population have ended up significantly higher than the rates developed. One thing to note, the difference in the federal and state numbers is greater than the regular Medicaid FMAP rate (56.28%) because much of the rate adjustment impacts the Health and Wellness population and they receive 97.5% federal FMAP rate.
• Another significant driver that lead to the rate increase was prescription drug costs. The capitation rates do not include the rapid rise in drug costs we have seen over the past several years. I’m sure most of you are aware of the new hepatitis C curing drugs that cost around $80,000 for a complete treatment and the increase in the EpiPen cost, but there have also been significant increases in a number of other drugs leading to higher drug spending. These increases have been partially offset by higher drug rebates, but the state keeps the drug rebates while the MCOs are responsible for the higher costs incurred by both the Iowa Health and Wellness and the Medicaid populations. This is one of the factors that lead to a larger surplus at the end of FY 2016.
The factors above weren’t the only ones that lead to the rate changes, but were the leading causes. I’m sure you will have many conversations with the DHS over this decision in the months to come, but the message they gave me was that to be fair to the MCOs and to the providers and patients they serve, the Administration felt it was necessary to make this change.

As I said above, it will probably be a week or two before we have a Medicaid forecast, but for FY 2017, we are probably looking at shifting from several million dollar surplus before this rate adjustment to a $20-$30 million dollar need.

Please let me know if you have any questions.