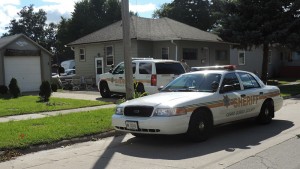 MASON CITY – Police in Mason City thought they had cornered a wanted sex offender Monday night, be the man was not caught.

About 6:04 PM last night, officers were checking 100 block 16th Street SE for wanted subject Mark Monroe Hoffman, age 55, of Mason City. Police tell NIT that they had a tip he may be at 115 16th Street SE or nearby. This is his house, located only a block away from two schools. Officers checked the area but were unable to locate. Police were seen int he area with flashlights and guns drawn, but came up empty.

“It looks like Hoffman currently has 4 felony warrants that he is wanted on,” a police spokesman told NIT.

Anyone with info on his whereabouts is asked to contact their law enforcement.

Mark Hoffman is listed as a tier 3 sex offender on the Iowa State Sex Offender Registry stemming from an incident that started in a bar parking lot in Mason City in August of 1995. Kenneth Sharp and Mark Hoffman both where arrested that August for 1st degree kidnapping and raping of an adult female at knife point. Before Hoffman’s trial he entered a voluntary guilty plea, instead pleading guilty to a lesser crime of aiding and abetting sexual abuse 3rd degree, receiving a 10 year prison sentence.

Most recently, Hoffman was left along with two young boys in his garage.  Hoffman was accused of violating the state’s sex offender registry on September 21, 2014, after police went to his house and he ran from deputies. An investigation showed that a woman, Jaime Lynn Peterson, age 32, was at Hoffman’s house with her children that day.  She was arrested along with Hoffman and charged with two counts of child endangerment for leaving her three-year-old son and five-year-old son alone in the garage with Hoffman.  Peterson later pleaded guilty to one count of child endangerment, while the other was dismissed.  She was sent to jail and put on probation.