Convicted domestic abuser back in jail for second probation violation

Reed, now age 62, was guilty in February of insolent behavior in the court. As a result, he was sent to the Beje Clark halfway house for 180 days. He is now accused of violating his probation for a second time.

Earlier in 2015, a complaint about Reed led to his arrest for drunk driving. On Monday, July 12, 2015 at about 9:39 PM, a Cerro Gordo deputy was flagged down by a concerned citizen due to a vehicle sitting in the middle of the roadway near 12th Street NE and Pennsylvania Avenue. The deputy investigated, and arrested the driver, Reed. He was charged with operating while intoxicated, open container of alcohol and stopping in the travel portion of a roadway.

Reed was later found guilty of just drunk driving (th either charges were dismissed) and sent to jail for 2 days and ordered to pay $1,827.50 in fines and court fees.

Reed has ye too make a payment on any of the above balances owed to the courts, records show. 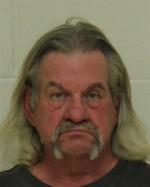