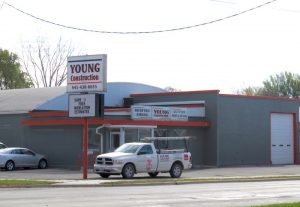 MASON CITY – A Mason City construction company claims it has been the victim of a burglary in which over $10,000 worth of tools and supplies were stolen.

Mason City police confirm that on October 8, 2016, at 10:10 AM, an employee with Young Construction reported a burglary to the business, located at 1539 North Federal Avenue. Police tell NIT the burglary is believed to have occurred within previous 16 hours. Over $10,000 worth of tools and supplies were stolen.

Young Construction, in a paid social media post, claims the details of the crime were:

Young Construction says it is “offering a $1,000 cash reward for information that leads to the tools and the arrest of person(s) that were involved in the crime. All tips we receive will be kept anonymous. You can call 641.430.1767.”

Police say this case is still under investigation.

This alleged burglary is the second such incident at Young Construction within a year. According to police, on November 27, 2015, approximately $500.00 in tools were stolen from a truck on the same property.