HAMPTON, IOWA – Law enforcement attempted to stop a speeding, drug-toting Hampton man but he refused to yield, leading police on a high-speed chase that employed an airplane.

At approximately 11:45 PM Friday night, October 21, a Hampton police officer attempted to stop a vehicle after it was seen traveling at a high rate of speed in the area of Olive Avenue and Highway 3.  The officer activated his emergency lights and siren and a pursuit of the vehicle was started. The pursuit lasted approximately 20 minutes and covered about 26 miles. The pursuit ended when the car went into a field and entered a ditch in the 200 block of 85th Street. The driver then ran on foot into a standing corn field.  Iowa State Patrol was contacted to have a plane assist in the search of the field while ground officers established a perimeter. Shortly after the plane arrived, the driver, Martin Zaragoza of Hampton, was taken into custody in the field by two Hardin county sheriff deputies.

Martin Zaragoza made a court appearance saturday morning and was held on $35,000 cash only bond.

No one was injured during the course of this pursuit. One hampton police car did recieve minor damage as a result to the vehicle pursuit. 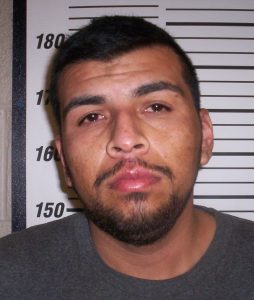