This news story was published on October 13, 2016.
Advertise on NIT • Subscribe to NIT 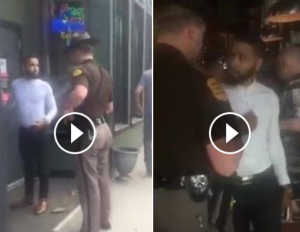 Screenshot of video posted to social media by
Kadara Brown, showing the altercation between Brown and a state trooper in a Des Moines bar in July

DES MOINES – An Iowa man who was caught on video challenging an Iowa State Patrol trooper who tried to question him about suspicious activity is guilty of interference.

Video shot on Thursday evening, July 7, 2016 in downtown Des Moines showed 26-year-old Marvey Raheem Brown of Des Moines walking into a bar, followed by an Iowa State Patrol trooper. The video was shot by an associate of Brown; it showed the trooper in a calm manner ask Brown for identification and attempt to persuade Brown to comply with his demands. The trooper was asking Brown for identification. Brown refused and argued with the trooper, and told the trooper not to touch him. The altercation continued into the bar, where patrons looked on.

According to comments left by Brown and his associate, Brown had pulled into a parking spot near the bar and gotten out of his vehicle. The trooper allegedly turned on his cruiser’s lights and asked Brown to stop and get back in his vehicle. Brown refused and continued walking to the bar.

“How do you get pulled over after you are parked and out of your vehicle!?” Brown’s associate, Kadara Brown, wrote via social media.

The trooper followed on foot, asking Brown to produce identification. His associate shot video of much of the interaction, but has since removed the video from social media.

Eventually, Brown was placed under arrest, but not before the trooper drew a taser from his belt and pointed it at Brown inside the bar. Brown had pulled his arm away from the trooper as the the trooper attempted to restrain him.

Brown was arrested on several charges, including interference with official acts, driving with a suspended license, failure to maintain registration plate, no registration, no insurance and unlawful use of a license.

Brown claims he was in jail for several hours before his associate, Kadara Brown, bailed him out.

As a result of this incident, Brown pled guilty to interference with official acts. He was ordered to serve 1 day in jail and pay $397.50 in fines and court fees. He was found not guilty of unlawful use of a license and no registration. 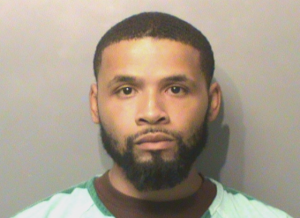