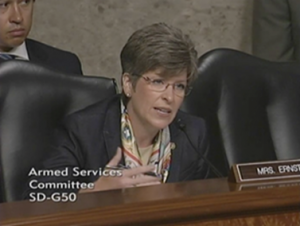 As an Iraq war veteran, the horrific rise of ISIS has long been a focus of my work on national security in the United States Senate. From Syria, to Afghanistan, to San Bernardino, California, I have pushed for better policies in our fight against an enemy that is spreading at an alarming rate.

Over the past year and a half, I have fought for providing more lethal aid to the Kurdish Peshmerga in Iraq, ensuring we have adequate support on the ground in Afghanistan, and I continue to support a new authorization for the use of military force against ISIS – one that does not tie the hands of our military commanders. As we continue to watch the global expansion of terrorism, we cannot allow for weaknesses in our strategy.

I view the failure to address ISIS’s expansion into Asia as one of those weaknesses.

The January 2016 attack in Jakarta, Indonesia was sadly only a small example of what ISIS is capable of in the region. Islamic extremist groups in Asia, like Abu Sayyaf, have carried out worse attacks in the past. Often viewed as disorganized and fighting against each other, these groups have now started to band together beneath the flag of ISIS.

Unfortunately, much like the Middle East, the groups now fighting for ISIS are not new faces to U.S. troops on the battlefield in Asia.

Shortly after the horrific attacks on September 11, 2001 U.S. special operations forces were already quietly operating in Asia, a place Khalid Shaikh Mohammed was found to have used as a planning ground for the attack against the U.S., and a region riddled with Al Qaeda linked terrorist groups. Deployed in support of Operation Enduring Freedom, U.S. troops excelled at advise and assist missions in the Philippines. Efforts to establish an Indonesian counterterrorism unit were hailed as a success.

With an annual budget less than the cost of one new F-35 Joint Strike Fighter, there was reason to believe our efforts were making a positive impact in a region plagued by decades of Islamic extremism.

The decision in 2014 to officially end operations in the Southern Philippines left a void that ISIS has started to fill. The United States officially ending its Joint Special Operation Task Force led to, on a smaller scale, something much like we witnessed in Iraq and Afghanistan. Just as Al Qaeda in Iraq became ISIS, we are now seeing Abu Sayyaf follow suit in Asia.

While it is easy to dismiss these groups as mere criminal gangs and disorganized rebels, the Philippines lost 44 of its Special Action Police in a single battle against them last year. And in June of this year, they released a call for other fighters to join them. The video, proudly displaying the black flag of ISIS, states “if you can’t get to Syria, join the mujahedeen in the Philippines.”

Despite efforts to curb the rise of ISIS from the Filipino government through negotiations, peace agreements and military action, the violence only continues. In April of this year, the Filipino Army lost 18 soldiers in an attack quickly claimed by ISIS. Most alarmingly, the terrorists are following the same tactics with civilian executions. Tragically, this was most recently witnessed with the beheading of a Canadian citizen in June.

Terrorist attacks, like the 20 innocent civilians killed in Dhaka, Bangladesh, cannot become a common trend in a region already plagued by natural disasters, a nuclear North Korea and a rising China.

While the United States moves forward in addressing many threats in Asia apart from terrorism, we cannot turn a blind eye to the threat of ISIS. I applaud the deployment of the Terminal High Altitude Area Defense – an anti-ballistic missile system – to South Korea, our increased freedom of navigation patrols in the South China Sea, and the announcement of five new U.S. bases in the northern Philippines. However, none of these directly take aim at addressing ISIS.

Addressing terrorism in the region will contribute to our larger policy objectives of showing strength in the region and pivoting to the Pacific. The U.S. operations from 2001 – 2014 were not done in a vacuum, they helped build partnerships and were carried out through supporting our allies in the region. These are tactics we strongly need to reevaluate for future operations.

With Japan joining the global coalition to counter ISIS, and the Philippines continuing to fight terrorism in its own backyard, it is clear we have allies to work with. It is time we do so.

Ernst is a U.S. Senator for Iowa, combat veteran, and member of the Senate Armed Services Committee