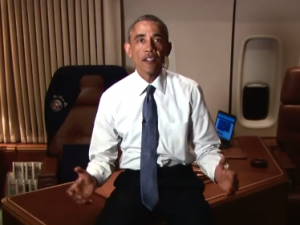 WASHINGTON, D.C. – A Rockford, Iowa meth dealer will be getting out of prison way early, thanks to President Barack Obama.

Michael Sandmeyer, age 55 and formerly of Rockford, Iowa, but now calling a minimum security federal prison camp in Yankton, South Dakota his home, was convicted of possession with intent to distribute 500 grams or more of methamphetamine (mixture) after having previously been convicted of a felony drug offense; felon in possession of a firearm in the Northern District of Iowa.

In all, 214 individuals were granted commutation of sentences by President Obama, today.

“The power to grant pardons and commutations… embodies the basic belief in our democracy that people deserve a second chance after having made a mistake in their lives that led to a conviction under our laws,” President Obama said.