During a traffic stop at 12:12 AM February 20, 2016, Forest City police investigated at the intersection of Highway 9 and 190th Street. As a result of the investigation, the driver, Cody Wesley Kirchner, age 26 of Mason City, was arrested and charged with Possession of Marijuana, Driving with No Insurance, Driving Under Suspension, Stopping on a Paved Highway, Violation of Title/Registration, Possession of Drug Paraphernalia and Theft in the 5th Degree.

Kirchner was placed on probation for a year last September for violating the state’s sex offender registry. NIT also reported last August that Kirchner was arrested for stealing from Pure Pleaure sex store. He pleaded guilty in September to fifth degree theft and was fined as a result of that crime.

Police also arrested Kyle Thomas Kirchner, age 23 of Mason City. He was charged with Possession of a Controlled Substance, Possession of Drug Paraphernalia and Open Container as a Passenger.

Casey Jean Kirchner, age 28 of Mason City, was also arrested and charged with Possession of Drug Paraphernalia, Possession of Marijuana, Open Container as a Passenger and No Seat Belt. 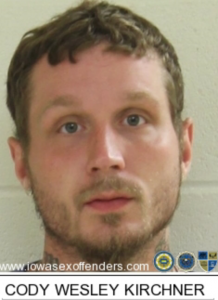