EMMETSBURG, IOWA – An Iowa man is guilty of a felony and was sent to prison for 5 years after he fired a gun at a crop dusting plane last summer.

Records show that a Steier AG Aviation crop dusting plane was struck by a bullet as it sprayed a field in Palo Alto county on July 31, 2015.

As a result of an ensuing investigation, 55-year-old John Dale Metgler of Whittemore, Iowa was charged with terrorism, intimidation with a dangerous weapon, stalking and going armed with intent, all felonies. After a long court proceeding lasting months, Metgler was found guilty by a jury on November 13, 2015 of felony going armed with intent. All the other charges were dropped.

At sentencing on March 15, 2016, Metzler was sentenced to 5 years in prison and he was transported to Oakdale in Coralville for processing. He must also pay $4,877.80 in fines and court fees. Metzger served notice of an appeal.

After the verdict, Steier Ag Aviation released a statement via social media, saying “very relieved it is over. Hoping for a safe and uneventful season next year.” 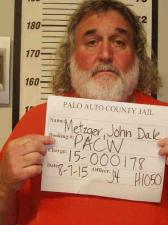