MASON CITY – A Mason City woman violated her probation once too often in a drunk driving case and will now grace the inside of a jail cell for 3 months.

Kinda Rochelle Jones, age 37, was busted by a Cerro Gordo deputy for second offense drunk driving back in December of 2013. She was put in jail for 2 weeks, placed on probation, and has paid nearly $5,000 in fines and court fees as a result.

In the years following, Jones has violated her probation twice; once in 2015, which sent her back to jail for 2 weeks and now again this year. She was again found guilty of a probation violation on March 7 and judge Karen Salic sent her to jail for 3 months. She is in the county jail now, serving her sentence.

Jones made the news back in July of 2014. She had been involved in a brawl with a man in a downtown Mason City bar at about 2 AM on the night Ragbrai rolled through town. Police, who were still patrolling after the Ragbrai event was wrapping up, observed the incident and arrested Jones and John Paul Quinones. Both were charged with public intoxication; Jones later pled guilty. 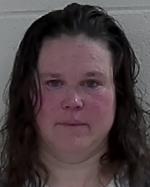