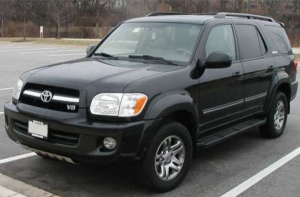 MASON CITY – The Mason City Police Department is asking for the community’s help to locate a stolen vehicle.

The vehicle is a black 2005 Toyota Sequoia Limited. It was stolen from the parking lot at Mills Fleet Farm on Monday, December 28 at around 12:30 PM. Iowa license plate CQB581 was on the Toyota when it was taken.

The vehicle pictured is not the actual vehicle that was taken but is an example of what it looks like. It is likely the vehicle is still around the Mason City area so we are asking the community to keep an eye out for it.

Anyone with information regarding the theft of this vehicle is asked to call the Mason City Police Department. Information can be directed to Officer Lane Siefken, 641-421-3636 ex.4125.