MASON CITY – A former Mason City man who participated in a violent street brawl nearly five years ago and was sent to prison was arrested during a traffic stop early Wednesday morning.

A Mason City police officer stopped a suspicious vehicle at 12:37 AM Wednesday near the 200 block of 3rd Street NE. After an investigation, the driver, 26-year-old Jared Michael Kropf, was found to be wanted on charges out of Polk county and Story county, which include three counts of interference with official acts, one of which includes causing bodily injury. Kropf failed to appear in court on January 4, leading to the arrest warrant.

At the scene in Mason City, Kropf was arrested. He was charged with driving while revoked (due to drunk driving), no insurance, interference with official acts, and failure to yield to an emergency vehicle. Kropf was jailed in Mason City where he is still being held.

Kropf has faced numerous charges by authorities for violent crimes.  He faced domestic abuse and interference with official acts charges earlier this year in Story county, where he now supposedly resides.  On April 3, 2011, Jared Kropf, along with his brother Brandon Kropf, used baseball bats and other weapons in a street fight at the 500 block of 8th Street SE in Mason City.  Jay Barrientes and Tony Walker, both of Mason City, were transported to Mercy Hospital East Campus for injuries received during the fight. The Kropfs were charged with felony willful injury.  Over a year later, on July 10, 2012, Judge James M. Drew sentenced both men to the maximum of up to five years in prison on one charge each of amended class “D” felony willful injury causing bodily injury. 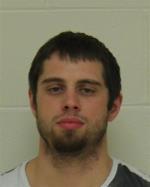