Convicted drunk driver arrested after pulled over by cops

MASON CITY – A woman accused previously of drunk driving at least three times was stopped while driving after 1:00 AM Wednesday morning and jailed.

A Cerro Gordo deputy stopped a vehicle Wednesday morning at about 1:20 AM for an equipment violation near Jefferson Avenue and 6th Street NW. During the investigation, the driver, Megan Elizabeth Hermen of Mason City, was arrested. She was charged with Driving while Revoked, Driving under Suspension, and Providing False Identification Information.

Hermen was jailed and soon released. She was charged with felony third offense operating while intoxicated back in July of 2013. She later pled guilty to only first offense operating while intoxicated and had her license revoked and was sent to jail for 30 days. She as also ordered to pay $2544.38 in fines and court fees. Records show she has made $0 payments on that balance and in March of 2015 the overdue balance was sent to third party debt collection. Courts have made no effort to pursue Hermen, records show, since then. 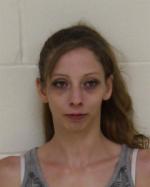