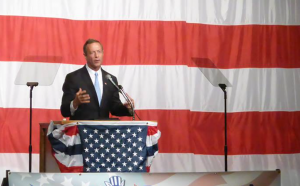 KEOTA, Iowa — It is a crisp December afternoon on the campaign trail and Democratic candidate for president Martin O’ Malley is facing a tough crowd.

This wasn’t the case earlier in the day for the former Maryland governor and mayor of Baltimore, when he had held a town hall at the University of Iowa and was met with great interest by the mass of students, professors and locals from Iowa City.

That group appreciated O’Malley’s long and sometimes complicated discussions of topics that varied from climate change to national security. They were also impressed by things other than his intellect. After the event, no less than three different attendees asked the trim 52-year-old about his workout regimen.

But this crowd is different. All that stood between going home for the day for the students of Keota Junior and Senior High School was a presidential candidate that they had never heard of and who promised to be really, really boring. So the assemblage was various parts uninterested, squirmy, restless, and zoning out on their phones.

But O’Malley was prepared. He didn’t deliver a stump speech but instead took the microphone and said, “I need volunteers!” Hands shot up amid cries of “Me, me, me!” and “Him, him, him!” O’Malley picked his five students, and the students actually paid attention as he had the volunteers act out a physical representation of unequal income growth in the past 30 years. Yes, you read that correctly. A presidential candidate directed an impromptu performance art piece at a very small school in a very small city in southeastern Iowa.

But such is the joy of presidential campaigning for the Iowa caucuses and such is the energy and inventiveness of underdog Martin O’Malley, a candidate who is a member of a Celtic rock band “O’Malley’s March,” plays guitar at campaign appearances, calls Bruce Springsteen “The great poet laureate of the American dream,” and started off his speech to a giant Democratic crowd in Clear Lake, Iowa, in April saying, “You and I are part of a living, self-creating mystery, my friends, called the United States of America. But the promise that is at the heart of that mystery is no abstraction. It is the very real promise that wherever you start, but for your own hard work, your own talent, and your own love of family, you can get ahead.”

O’Malley is an underdog because he is facing two powerhouses in the Democratic Party, one established and one new: Hillary Clinton and Bernie Sanders. But he is not an outsider by any means. As he tells the crowd in Iowa City, “Only one of us has 15 years of executive experience bringing people together to actually get things done.”

O’Malley’s campaign mantra is “actions, not words,” and he cites his governing record in that context. In Iowa City, his voice becomes softer when he says that as mayor of Baltimore, “We put our city on the path to the biggest reduction in crime of any major city in America. And every single day it was hard. And every single day we had conversations about criminal justice reform and race in America. And yet we saved a lot of lives.”

He proudly points out that under his tenure Maryland raised the minimum wage, increased education funding, froze college tuition, and expanded family leave. “We passed marriage equality. We passed a ban on combat assault weapons. And if there is a thread that runs through all my actions as governor, it is the thread of including people more fully in the economic, social and political life of our state.”

O’Malley has an ambitious agenda. In Iowa City he says, “I believe the difference between a goal and a dream is a deadline. So for my goals I have a timeline: To cut gun deaths in half in 10 years; to eradicate childhood hunger in five years; to cut youth unemployment in half in three years by making national service a universal option.” He also wants to raise the national minimum wage above the poverty line, expand paid family leave, pass comprehensive immigration reform, overturn Citizen’s United, move toward a 100 percent clean electric grid by 2030, and have every state form bipartisan congressional redistricting commission like Iowa has.

On the national defense front, O’Malley wants to improve the federal government’s ability to thwart and respond to terrorist attacks by increasing intelligence sharing among state and local governments and investing in intelligence and anti-terrorism detectives and network capacities. “Conflict in the 21st century is very different than conflict in the 20th century,” he tells Iowans. “It is a multi-dimensional chessboard.”

In response to a pastor’s question in Iowa City about Republican presidential candidates’ comments on Muslims, O’Malley says, “The truth can defend itself, but she needs to be stated. So I intend to state the truth, every day in this campaign. And it is that we need each other in order to succeed in this fight against ISIL, and there is no group of Americans that we need more than our Muslim-American neighbors. We’re all in this together.”

“The way we defeat ISIL is not by turning upon one another by reinforcing the solidarity that has led us victoriously through many conflicts in the past.”

O’Malley is bullish on America and seems genetically incapable of being cynical on the campaign trail. In Clear Lake he said, “We are a good people, we are a generous people, and we have only the need of new leadership and a belief in one another to forge that new consensus for American progress.”

“So let us get up for greatness. Our challenges are huge, but not larger than we are.”