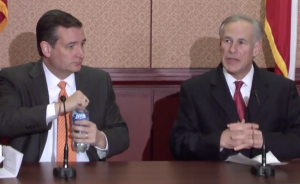 WASHINGTON, D.C. — U.S. Senater Ted Cruz, a Republican from Texas, on Wednesday introduced the State Refugee Security Act of 2015 at a press conference in the U.S. Capitol where he was joined by Texas Gov. Greg Abbott. The State Refugee Security Act will amend the Immigration and Nationality Act to permit the governor of a state to reject the resettlement of a refugee in that state unless there is adequate assurance that the refugee does not present a security risk.

“This legislation will protect the authority of the states and the authority of the governors to keep their citizens safe. Some 30 governors across the country have stood together with Gov. Abbott – standing together as one saying their obligation is to protect the safety and security of the citizens of Texas and the citizens of each of the states that have elected those governors. Those officials are doing their jobs. I applaud them and Gov. Abbott for honoring their commitments to the men and women who elected them,” Sen. Cruz said. “It is my hope that Congress will take up and pass into law the legislation that I introduced today that gives the governors the ability to opt out if the federal government is not sufficiently vetting refugees.”